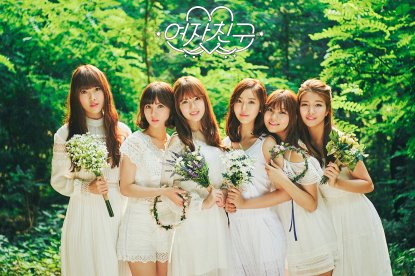 I’ll admit that in the past I’ve added a couple of their songs onto my playlist but as far as the group itself went, I had never really had much of an interest in them. And before you go on and jump on my case just know that it’s NOT meant to be a knock on them at all, really I swear. 😇 In fact I’ve always had a respect for the quality of their songs. It’s just that my preference tends to lean more towards the edgier hip-hop based groups out there. Which if you know anything about GFriend….you would know that their concepts are as far away removed from that as one can possibly get. Placing them right at the other end of the spectrum at complete odds from my usual musical tastes. So what suddenly changed to now have me be curious about GFriend?

Well, recently through the power of YouTube I found myself watching some episodes of Weekly Idol…yup I went down THAT rabbit hole. O_O Sitting in front of my computer for countless hours, going through, and consuming the episodes like there was no tomorrow. Only to then suddenly run into a GFriend episode and seeing as I was on a roll I decided, “what the heck I’ll give it a go.” So I started watching with some reservations, not really expecting too much. However as it went along I was pleasantly surprised when they began covering some boy group choreography. Their moves were pretty dang good and blew away any expectations I had of them. I hadn’t realized they were as good a dancers as they were. But then things kinda went off the rails in the best way possible. The poor girls did try to get things back on track but….yeah that wasn’t happening. XD What did happen was a poor attempt at Exo’s growl.  It was at that moment when I discovered a new bias, Yuju. lol Her performance was so trash but she got so into it that it did like a 180 degree turn and became straight up awesome!!

I replayed that part, god knows how many times. It’s so relatable because that’s pretty much how I would do. 😛 Plus bonus points for them trying BTS’s I need U, really love that choreo. Oh and you know what else I love? Quirky and out there idols like Yuju seems to be. Because of that for the last couple of hours I have been on a total Yuju binge watching session. lol pulling up all sorts of clips/highlights of her that I can. And hey if you peeps out there know of any good ones please feel free to share them with me. ^_^ It would be much appreciated.

And I gotta say, those weren’t the only tidbits that caught my attention. Through watching some more clips of her afterwards I was able to find out that she too has an amazing vocal prowess. I say this after stumbling upon a few fan made compilations titled things like, “times she has blown everyone away.” In one of them I discovered a video that in my opinion best showcases this range, in it she sings a song called Mermaid. The girl hits some good high notes which makes it a must listen in my book. 😀 Also it’s crazy reading the comments from the video because according to many of them JYP  apparently missed out on signing her a few years back. Like wtf JYP, looks like we BOTH need to be punished for sleeping and not recognizing such talent much sooner.

Anyways, I do look forward to hearing any new stuff she drops and by extension her group too. 🙂

Now to close this out I should probably share a really awesome clip to showcase all this talent I’ve been gushing on about but nope. Instead I’m gonna be a terrible person and share another derpy clip. >:) This is one where she is rapping on a show called After School Club. It’s a short but very swaggalicious performance. 😉

p.s. ok for realz though I really should share at least one of their actual songs. So here you go. This is called Fingertip and it was released not too long ago. It’s a good song and it’s probably the edgiest they have ever been to date. They look more mature with the new direction and I think it really suits them. If they can keep a concept more along these lines in the future then I may just end up becoming a “Buddy.” <—their fandom name. With that for realz I conclude this post. Thanks for reading like always.