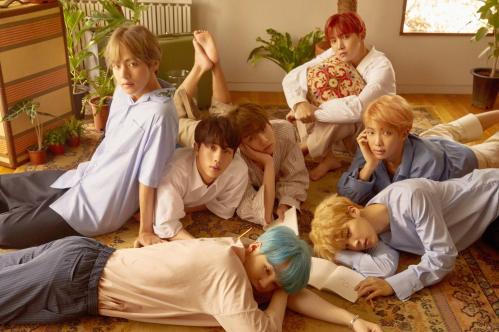 Oh yeah I got another BTS post for ya here. Hopefully I’m not tiring you out with these but there’s just so much to talk about with this new comeback. Since for lack of a better word it has been absolutely “LIT”, like records have been shattering left and right and at quite the alarming rate. For example, I’ve been discovering that the boys have been topping the i-tunes charts in countries that I didn’t even know ever listened to K-pop to begin with. Last I had checked they were on top of the charts in 73 freaking countries! I may need to brush up on my geography skillz but isn’t that like 1/3 of all of the countries on the planet? That’s straight up bonkers when you think about it and that aint even the half of it, they’ve also had one of the most played albums on Spotify and last I checked they were still trending over on YouTube too. And as result of all these happenings my mind has pretty much literally and reasonably so been in a constant state of being mind blown. 😮

However I was finally starting to come down when BAMMM, BTS had their own Comeback show take place on Mnet. I didn’t get a chance to watch the performances while they were live but I did track them all down once I got a chance. Basically they were all fantastic but two got my attention in particular. The first was their live performance of Go Go. It was one of my top songs from the album but that shizz took a whole new persona of it’s own when translated to the stage. It was such an energetic and silly performance. There were many meme inducing moments and some questionable dance moves that left me going, “what are y’all doing?” lol Seriously some of the moves were so dumb but in the best way possible. 🙂

But for as much as I took a liking to Go Go, it did not compare to the amazeballs that was the live version of Mic Drop. That song is without a doubt my fave of the whole album. Which come on that shouldn’t come as much of a surprise considering my history of loving Rappers and all. It was almost a given I would like it the most. But even with the high ass expectations that I had had for it like I did with the DNA MV, nothing could have prepared me to become as shook as I was about to get. I mean I nearly lost it seeing Jimin going hard at the 00:30 second mark, down at the bottom of the screen. lmao Took me so off guard to see him being that way because in my mind I’m still picturing him being all sweet like he was in Serendipity. But hey don’t take my word for it, if you still aren’t buying into the hype then take a brief moment to check it out yourself:

So tell me was your Jaw Dropped by this like mine was? I swear I was shook from the moment J-hope popped up on screen and it wasn’t just cuz he is my bias of the group. No there was something special in the aura of this live performance. It was like I was thrown back to some 90’s hip hop except the video was somehow in HD. 😛 I guess a lot of it had to do with the surprise factor since I expected just about all the focus of this song to be on the Rap Line of the group. But no surprisingly all the members were incorporated nicely. And also I didn’t expect as strong of a choreo for this as what we got. Realistically I was like this will probs be a song in there were they take a break and maybe walk around as they rap. Use it to catch their breathe and rely on their swagger to carry most of it… Welp I was dead wrong on that!! 😅🤣😆

What about you peeps? Have you checked out any of the live performances yet? What were your favorites? What I came out with was hope that maybe Mic Drop can somehow get a special MV somewhere down the line. It’s too awesome to not get some kind of special treatment imo. With all that said at this moment I’m gonna go ahead and give the album another listen. So don’t be surprised by more BTS posts later on ok. 😇

25 thoughts on “BTS has Officially Dropped The MIC”