Last year was an amazing year for horror cinema in Korea. Take Train to Busan for example, that movie exceeded all possible expectations when it became as huge as it did worldwide. I remember going to my local theater one day and they actually had a couple of showings for it. It was the first time I’d ever seen a Korean film play there, it was pretty awesome. But before THAT movie ever became what it was, there was also this other smaller one which had developed a solid reputation of its own a couple months prior. A movie which may not have ultimately gotten as much worldwide hype in comparison…but to me it totally shoulda. That’s why I’d like to talk about it today, it’s called The Wailing. 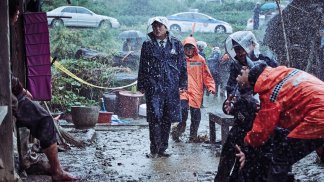 The movie is a horror thriller and in it you follow a Policeman by the name of Jong-goo. The thing of the matter though is… he really isn’t your typical heroic guy to say the least, as there isn’t anything particularly special about him to go on. He’s not good looking, he’s not athletic, and he’s not even that smart. If anything I would describe him as being aloof to the point of being comedically so.

However he does wanna do good by people and when those in his village start going savage and attacking others, he takes it upon himself to get to the bottom of things. Specially as the situation gets more un-explainable and all eyes begin to turn towards this mysterious Japanese man living on the outskirts. Also when his own daughter begins to be affected by all this craziness as well. And if we have learned anything by this point it is, you don’t be messing with no man’s kids.

This is what makes this such a good movie. There is much mystery and intrigue to go around but under all it’s strangeness and gore(yah there’s plenty of gore)there is heart to be found too. It manages to be relatable because even if you don’t agree with what happens on screen you can understand where the main character is coming from because he is fully fleshed out. The script is strong here but with the performances the material is able to be taken to that next level. The main guy really goes on a journey throughout this and you feel it every inch of the way thanks to how Kwak D0-won plays the part. By the end he is nowhere near the same man he was at the start. As for the girl who plays his daughter, I see a bright future ahead of her too. 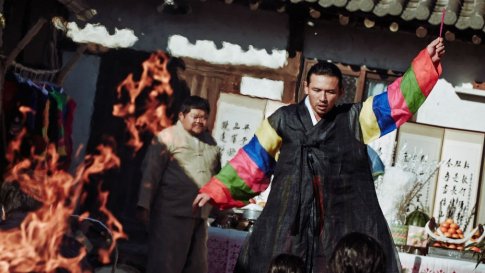 There is a scene in this movie involving her and a Shaman and it.was.fantastic! It was some serious exorcist type stuff and the way that little girl played up the scene gave me goosebumps. Made me feel all kinds of uncomfortable. But it wasn’t only her that shined in it because everything from how it was shot, to how it was edited, to the sound design was marvelous. It slowly built up the anxiety and tension until one could not handle it any longer. I wont speak more on that to keep myself from ruining it as I do think it’s a highlight of the movie. So all I will say about it is that it’s one of MANY visual achievements in this film. The cinematography throughout was on point for reals!

I seriously think as far as horror movies go this had some of the best shots even though most of the movie is pretty low key. Which is a nice fact because I feel like most of the time even good horror movies can come out looking cheap or low budget. But like I said not here, instead you get such an attention to the tinniest of details. Like all the buildings in the town looked real and lived in, the nature shots surrounding it give the village this secluded feel, and I like how it all comes together because it makes one feel like in THIS town fantastical things COULD happen. 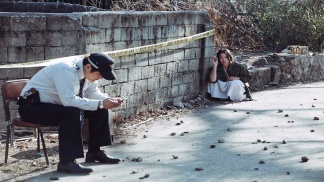 The only major warning I’d give you is that this isn’t one of those films to casually watch because there are a lot of details to be missed. It has its share of twists and turns and also there is a lot of subtext for one to pick up on. Plus this has some interesting parallels to stories that could be found in Christianity that if you are aware off could help you understand the movie easier. However don’t worry because the movie isn’t preachy and you can understand it without all that stuff but seriously you have to PAY ATTENTION. Either way though you will probs end up wanting to watch this a second time after. Lol And for sure you’ll head over online to see what other people’s opinions of the ending are, this I guarantee you. 😛

So now I’m gonna cut my review off here because while this movie has a long runtime, it’s over 2 hours and a half, it’s hard for me to mention anything else without spoilers. My final note? Go watch this is if you want to see a movie that will make you think on top of giving you a solid experience. I personally give this film a 9/10 and I don’t hand out too many of those.

P.S. If you’ve seen the movie already let me know what you thought down below.

10 thoughts on “The Wailing Review”