Sorry for the lack of engagement these days my peeps. I know I’ve been slacking when it comes to commenting, replying, and liking all your guy’s posts, but here’s the thing. Lately I’ve had a totally super solid legit reason for doing so. You see I’ve been mad busy playing this little music rhythm game on my phone called SuperStar BTS. I think the majority of you have heard of it before.

If not, no worries it’s simple to explain. It’s one of those games where you tappity tap buttons as they scroll down the screen on your phone with your thumbs. Anyways it’s a game I’ve wanted to review since it was announced. But in order for me do that, it’s one where I felt like I really had to sink my teeth into it first. Yup so that’s totally why I’ve been playing it non stop, entirely for research purposes. 😛 and with a surprising 41 playable songs, well I think you can see how time consuming it can get. More so if you have the itch to get 3/3 stars on each song like I do lol

But yeah I should have a full review up sometime Sunday or maybe Monday morning so that may be something to look forward to. Once I get it out I’m sure things will go back to normal for me and this blog. I could probs churn out the review sooner as in today or now even, but I really really wanna get to try out the “Hard” Mode on it at least one time. Cuz I’m not sure if it’s because I don’t really play rhythm games normally or play on the phone all that much to be frank, but the hard mode in this is actually really freaking hard. For me it is anyways. If any of you out there are playing this game already and find it easy then by all means don’t be greedy and share some of them tips with me. 😅

Seriously I’m such a noob at these kinds of games. You should of seen me struggle on easy mode when I first downloaded it. 😅😆 I must have looked hilarious because I was doing that thing you do that we all know doesn’t work. You know where you sway your whole body as if that is gonna somehow help you click faster. Yeah I was THAT thrash at the game. haha But worry not, because being a true gamer at heart that I am I have managed to power through and have now even managed to snag a 3 star rating or two on some of the songs in Normal Mode. Ah yes, finally! Slowly getting better at the whole hand-eye coordination I guess. 👍😃 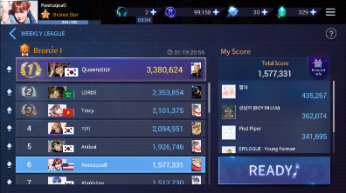 So yup just gotta keep at it another day or two to get into that hard mode rhythm then I can get my full thoughts out there. But a little spoiler beforehand, I think you peeps outta get this game. Don’t see how any BTS fan especially can pass it up. It literally makes listening to all your faves even better because now you will wanna get perfect scores on them. 😛 It adds good repeat value to all these songs you’ve no doubt already heard a million times by now.

P.S. Some BTS related developments that have happened recently:

First, I wanna say I was dead wrong with predicting MIC DROP Remix Dropping into the 82nd spot on Billboard Hot 100 last week. Or in any of the 80s spots for that matter, because apparently it managed to NOT move at all. Instead it somehow stayed on the SAME spot coming in at 79th on it’s 8th consecutive week on the chart. Which at this point I’m gonna call it their lucky number. Because they keep snagging that same exact spot over and over. lolz

Also the boys where recently featured on Vogue(in article and video form)and getting tweeted at as a result by YouTube, Calvin Klein, and Panda Express even. 😆 I recommend you check out the their article because it touched on a lot of things us ARMYs have been bringing up. For example, the odd ways BTS has been treated by media outlets in the West. Like how they’ve been getting asked mostly dumb questions so far.

And then of course I gotta bring up the fact that both BTS and Bang PD won BIG at the Seoul Music Awards this Year. Winning both for Best Producer and Artist of the Year respectively. Woot Woot for all! Nice to see the legend behind BTS getting increased recognition as well.

Which brings us to the last bomb that dropped! Listen to what Steve Aoki said in this interview:

WE GOT ORIGINAL MUSIC TO LOOK FORWARD TO BETWEEN BTS AND STEVE AOKI PEEPS!!! Such fantastic news. 😃I don’t think I can ended it any better way so on that note I’ll see you peeps in the future. Feel free to drop a comment in the meantime. I’ll do my best to get back at you at the quickest. 😊

20 thoughts on “Superstar BTS Is Consuming Me 😅”