That hat or more accurately put, “those hats”, be lying to you!!!

I was watching a reaction video to We Are Bulletproof pt2 moments ago and couldn’t help but be amused by yet another fresh group of people falling victim to Jimin’s hat trick. Of course I’m talking about that now iconic hat throw he does towards the end of the MV. haha To this day it’s always a small joy for me to see people go from 🙂 to 😮 or better yet O_O when they think it’s been done for real. If only because it reminds me of ALL the times I fell for it myself and trust me, I fell for the shizz many many timez before I thought different. 😛 So NOT judging. lol

However eventually I did learn the truth and now I’m here to share it with all of you awesome newbies/more casual fans who haven’t yet. But first, let’s talk about how the scene is remembered and how I use to remember it too. For the longest time in my mind I remembered it as, as I’m sure most ARMYs did,  Jimin doing his little solo dance, then with the most precise accuracy ever, throwing it over to our other boy Jungkook who catches it easy peasy.

I mean looking at that GIF it makes tons of sense why so many of us fell for it in the first place and why so many more will continue to fall for it in the future too right? Just look at how smooth they do it. Even after telling you this is fake, watching it again it looks mad real still, even I’m second guessing myself now. lol But let me hurry up and get to HOW it was  done.

You see while the choreo is going on there is actually a hat in background towards the middle of the screen on the floor. You can catch small glimpses of it throughout the MV. This is the white hat we are supposed to think Jungkook picks up for his part, 1 of the two needed. Then the second hat he gets we are suppose to believe is from him catching it from Jimin. Except here’s the kicker, Jimin NEVER actually throws a hat at all. Nope in reality Jungkook picks up BOTH hats he uses himself. They are stacked together in such away that tries to make only the white one visible. Then it’s this extra black hat that he keeps behind him, so when it looks like he is catching Jimin’s hat in reality he’s revealing one he already had in his hand. Real Smooth.

Here’s a screenshot of both hats: 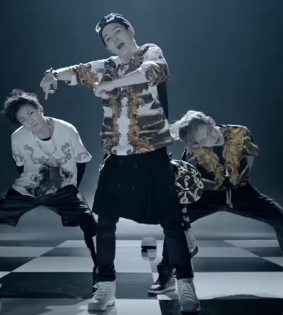 This is exactly how they did it during their live performances too. The dedicated fans that watched all those or better yet the fancams of those where the ones who picked up on it the easiest/fastest. Although a quick and easy tell that something was up the entire time was always how suddenly while Jungkook was playing with the hats, Jimin always suddenly put a “new” one on. How could he if he gave his away?

Anyways like I said before I’m sure most of you peeps knew this already, but if you didn’t let me know. And if you did, let me know how quick you were to pick up on it. How many knew it from the start? For me it took me many many months because I had never even considered they would fake it. For the longest my a$$ legit thought they must have done it like a bazzillion times until they learned to get it right. 😅🤣😆 If you want me to get more specific this was the exact performance that opened me eyes. haha

Felt so dumb after. With that I leave you until whatever my next random post is. 🙂

****P.S. while I was writing this some breaking news came in. BTS will be performing their new title track Fake Love(?) on The Ellen Degeneres Show this month. When exactly and if their title track is actually named that, has not been confirmed by BigHit. Only that an appearance will be made.****